In commemoration of the centenary of the restoration of Lithuanian statehood, two voluptuous and professional collectives - the State Ensemble "Lithuania" and the folk rock group "Žalvarinis" - have united their forces. The new season is a concert program "Let's celebrate freedom" - a joint project of the most interesting expression forms for the ensemble and the famous band.
The new overall 1.5 hour "Žalvarinis" and "Lithuanian"  program is characterized by high spirits. Here are genuine Lithuanian folk songs, folk dance elements and folk instruments. For many familiar traditional colors, the sounds of contemporary music and electric guitars are highlighted.

Interpretations of music, dance and songs created by the theme of the old folk songs are the interaction between the old and the new, modern and stubborn, whose birth was assisted by a creative arranger - composer, guitarist, leader of the folk rock group "Žalvarinis" Robertas Semeniukas.
He revealed that the idea, turned into a unique new program, was born 15 years ago, when "Žalvarinis" and "Lithuania" went to Vilnius together with Joninės concert in Nida together. "I liked the then Lithuanian program so I just talked with the ensemble to create something together. I thought that in fact it would be interesting to see on the same scene a strident ensemble and a modern folk and rock band. The idea has long remained unfulfilled, but it was probably not possible to have a better chance of being born - with the centenary of the restoration of Lithuanian statehood we united forces ", - says Robertas Semeniukas.

Remembering the most beautiful and brightest moments, and the somewhat darker facts that are presented to us by the stories narrated by the old folk songs, we invite everyone to enjoy the anniversary of the restoration of Lithuania's statehood, to celebrate our Freedom together with the State Ensemble "Lithuania" and the group "Žalvarinis" from this September. 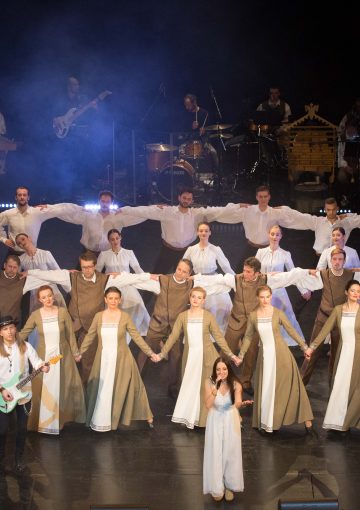